Cities need the power to use road tolls and congestion taxes, group says

It is long past time that Canada’s congested cities began putting a price on some of their most precious real estate, says a new report from Canada’s Ecofiscal Commission.

We’re not talking about toney residential enclaves, gleaming office towers, retail districts, industrial parks or condominium complexes, but rather the thoroughfares that join them.

“We don’t price road access, and the cardinal rule in economics is if you have an unpriced resource it gets over-used.”

Traffic congestion is the subject of the latest commission report, “We Can’t Get There From Here: Why Pricing Traffic Congestion is Critical to Beating It.” 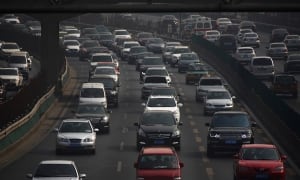 With less than a month to go until a key international climate change conference, Canadians may be bracing for an economic hit of some sort as the new Liberal government has promised a more aggressive international stance. As Ragan notes, however, “congestion pricing” fits into a suite of solutions that make as much economic sense as environmental.

Traffic gridlock has a huge economic cost, he said, citing the example of a plumber who can only do five jobs in a day instead of seven because of time spent driving between calls, or companies holding larger inventories because of higher shipping costs, translating into higher prices.

“We think of congestion as time waste, you all feel this viscerally and you hate it,” said Ragan. “But it’s actually worse than that. There are these other costs that most of us don’t experience directly.”

‘If we don’t jump on this, we will stay stuck in traffic. We will see our kids less, the prices of our goods will be high, our health will be less and our environment will be poor’– Chris Ragan, EcoFiscal Commission

The 49-page report is larded with fascinating factoids: That as much as 50 per cent of local congestion can come from drivers circling looking for parking; that 90 per cent of the goods we consume daily are transported by truck; that congestion directly costs Toronto about $7 billion annually and Vancouver $1.4 billion; that slow-moving vehicles are less fuel efficient and emit more exhaust.

Local application is key, as geographic constraints have as much to do with congestion as traffic patterns and volume.

Municipal design will be crucial, but provincial legislative changes may be needed to permit cities to levy tolls and federal funding could help cover the start-up costs of pilot projects.

Road and bridge tolls date back to at least Roman times but have been largely rejected in Canada, despite widespread application internationally.

Ragan says part of the problem may be that governments look at tolls strictly as revenue generators, rather than a way to alter driving habits and encourage use of public transit. Combine that with an impulse to fight congestion by building more roads and the problem never gets solved.

“Over and over again we see from cities around the world, when you build more capacity you actually don’t reduce congestion,” said the economist.

“The underlying problem is the incentives that are at work.”

He calls congestion pricing “a perfect example of an ecofiscal policy, where you price the problem and you recycle the revenues to generate economic benefits.”

The incoming Liberal government won a majority mandate on a platform that included spending billions on infrastructure, including transit.

“This is not the era of baskets and throwing in quarters – we’re beyond that world. This is a world where the technology is no longer an obstacle to doing it well—you’ve got transponders in cars and you can go into a limited-access HOT lane and it speeds up,” Ragan said. HOT stands for high-occupancy or toll lanes.

As Ragan puts it, mobility is a good thing and we need more of it. But building better roads and bridges combined with better public transit will still require an economic incentive to use that increased capacity in an optimal way.

“We need infrastructure, for sure,” said Ragan. “But you’ll get its maximum value if you put in some congestion pricing.”

“If we don’t jump on this, we will stay stuck in traffic. We will see our kids less, the prices of our goods will be high, our health will be less and our environment will be poor.”